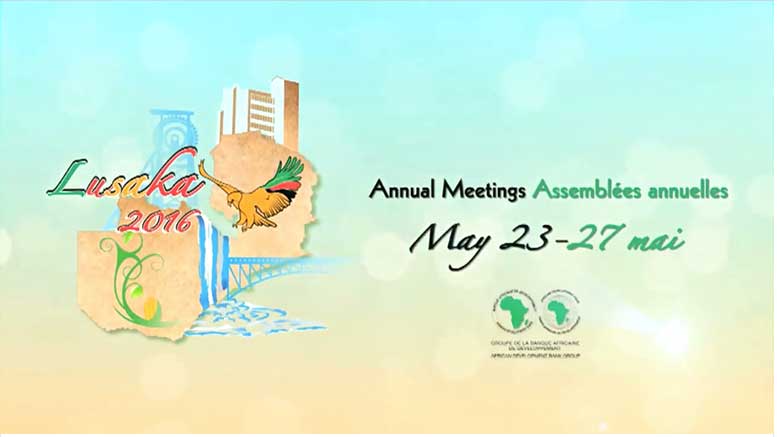 The African Development Bank Group (AfDB) will unveil its new agenda for the economic transformation of Africa at its 2016 Annual Meetings in Lusaka, Zambia, from May 23rd-27th.

The theme of this year’s meetings is “Energy and Climate Change”, and draws on one of the Bank’s “High 5” priority areas, namely to “Light up and Power Africa”.

Energy is considered the Achilles’ heel of Africa. This is why AfDB is determined to tackle the severe energy deficit in the continent where 650 million people don’t have access to electricity.

Akinwumi Adesina, President of AfDB, who will be presiding the Annual Meetings, spoke in a preview video message about this year’s program.

“This annual meeting will focus on 3 themes: challenges and opportunities facing Africa today, energy, and climate change.” he explains.

Adesina also noted that these 3 themes would take a quantum leap forward as the Bank unveils new strategies, and a program to create 25 million jobs for young people over the next decade.

The AfDB’s High 5s, designed to scale up its operations for the Africa’ transformation, are: Light up and power Africa, Feed Africa, Industrialise Africa, Integrate Africa, and Improve the quality of life for the people of Africa.

Governors, Finance and Economy Ministers, representing the 54 African and 26 non-Africa member countries of the AfDB Group will attend the Annual Meeting to review its 2015 operations report and approve its activities and budget for the coming year.

In Zambia, the AfDB has invested more than usd1bn in agriculture, water, sanitation, roads and education since 1971.

For more information on the meetings, visit www.afdb.org/am