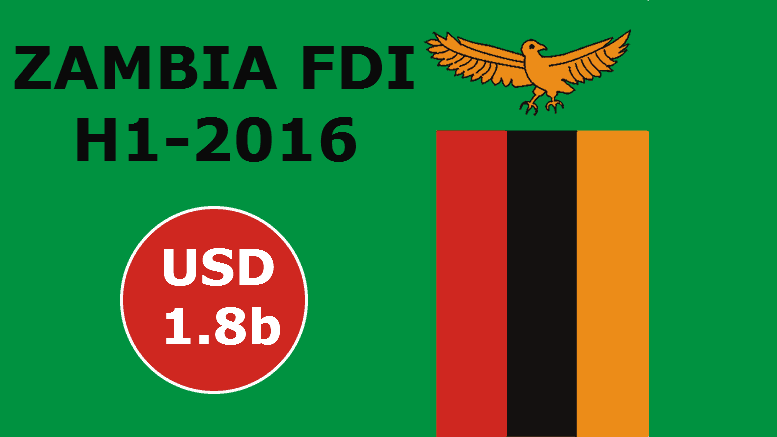 The Zambia Development Agency (ZDA) has recently announced that the country has recorded USD1.8b on Foreign Direct Investment (FDI) inflows in the first half (H1) of 2016.

In terms of volume, the Energy Sector attracted most of the FDI followed by Agriculture and Manufacturing Sectors.

According to the ZDA, the growth in FDI inflows to Zambia shows a positive trend for the economy despite the decrease in creation of job positions in the same period.

These mixed results are however a result of well-sustained investor confidence and conducive business environment in the country, the ZDA stated.

An increased number of high-profile business activities held in Zambia during H1-2016 are the tangible demonstration of the confidence in the country’s economy, the ZDA highlighted.

These business activities confirm the attractiveness of Zambia as a destination of FDI as mentioned by the United Nations Conference on Trade and Development (UNCTD) on its World Investment Report for 2016.

According to this source, Zambia was one of the best performed countries in attracting FDI in Africa in 2015 despite a fall over 7% of FDI inflows to the continent in the same period.

Zambia with USD1.7b ranked within the Top20 FDI destinations in Africa out of the 54 countries that compound the continent.

However, the volume of FDI inflows to Zambia was down by 48% from the volume recorded in 2014.

The slowing in FDI was mostly attributed to electricity shortages and uncertainties related to the mining tax regime which continued to constrain the Zambian mining sector.

Lower prices for copper (which accounts for over 80 per cent of Zambia’s exports), the collapse of the national currency and surging inflation also affected reinvested earnings.

UNCTDA indicates that despite the current commodity crisis and power shortages, Zambia recorded in 2015 one of the highest FDI inflows in the last six years.