According to the August 2014 Monthly Bulletin released by the Zambian Central Statistical Office (CSO), the country’s annual inflation rate didn’t move from July to August and maintained itself at 8.0 %.

The 8.0 % refers to the Zambia Consumer Price Index (CPI), which measures changes over time in the general level of prices of goods and services that households acquire for the purpose of consumption, with reference to the price level in 2009 (base year 2009 =100).

Between August 2013 and August 2014, the annual rate of inflation increased for Food and Non-Alcoholic Beverages; Clothing and Footwear; and Recreation and Culture.

The annual rate of inflation decreased for Alcoholic beverages and Tobacco; Housing, Water, Electricity, Gas and Other fuels; Health; Transport; Education; Restaurant and Hotel; and Miscellaneous goods and services.

CSO Director John Kalumbi, who presented the report, said that of the total 8.0 % inflation rate, Food and Non-Alcoholic Beverages products accounted for 3.6 % while Non-Food products represented the other 4.4 %.

Mr Kalumbi also announced that the CSO would officially launch the Zambian National Strategy for the Development of Statistics (NSDS) on September 2nd 2014, as well as have a meeting with stakeholders for the draft of the Statistics Bill 2014 on September 3rd. 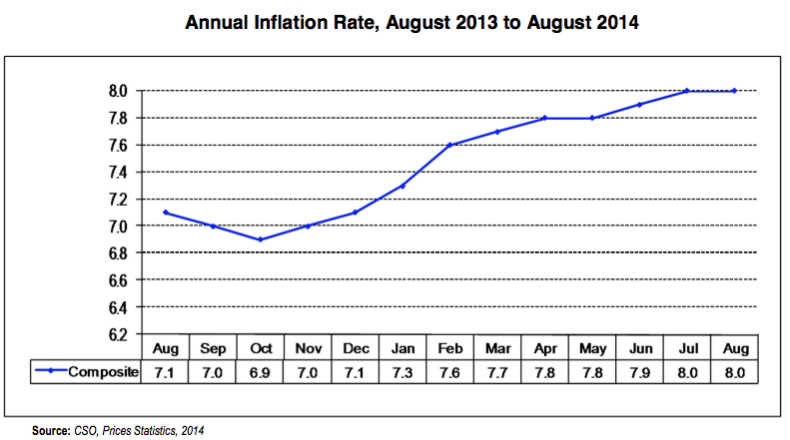 On 21st June 202, the Zambia Development Agency (ZDA) and the Kenya Investment Authority (KenInvest) signed a five-year…
This website uses cookies to improve your experience. By continuing to browse the site, you are agreeing to our use of cookies.Accept
Privacy & Cookies Policy