The agreement lies under the Southern African Power Pool (SAPP), which was created by the 12 country members of the Southern African Development Community (SADC) and comprises 16 utility companies that have developed a common power grid among their countries to support reliable electricity supply from one to each other.

According to the High Commission of the Republic of Zambia, the agreement follows a request made by Zambia’s Energy and Water Development Minister Dora Siliya, whom on behalf of President Edgar Lungu held a meeting with South Africa’s President Jacob Zuma and other government officials to express the interest to import 300 MW of power to Zambia.

South Africa has had also difficulties to meet its electricity needs last year, but after imposing power cuts on approximately 100 days during 2015, it has stabilized its power supply and has avoided blackouts for five months in a row according to Bloomberg.

On the other hand, Zambia is working on diversifying its power generation industry since El Nino cycle has brought stronger and longer droughts that have hit the country’s dams which don’t count with the water levels necessary to generate electricity and that account for 92% of Zambia’s total installed capacity of 1,948 MW.

According to the Common Market for Eastern and Southern Africa (COMESA), Zambia has undertook a broad program to tap its natural water reserves able to produce a potential power capacity up to 6,000 MW.

The Zambian Government has also recently announced that it is planning to triple the power generation capacity in the country within the next two years with photovoltaic energy projects that would soon receive USD 500 million of foreign direct investment (FDI) to immediately add 400 MW of capacity in a location that has not been disclosed yet according to Zambia Development Agency (ZDA).

According to the United States Agency for International Development (USAID), Zambia would bring an additional of 2,000 MW by the end of 2016 with its support and a total investment of USD 1.2 million, which is part of a USD 5.8 million bilateral agreement focused on diversifying power generation and raise the rural access to electricity from the current 3%. 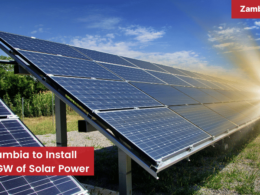